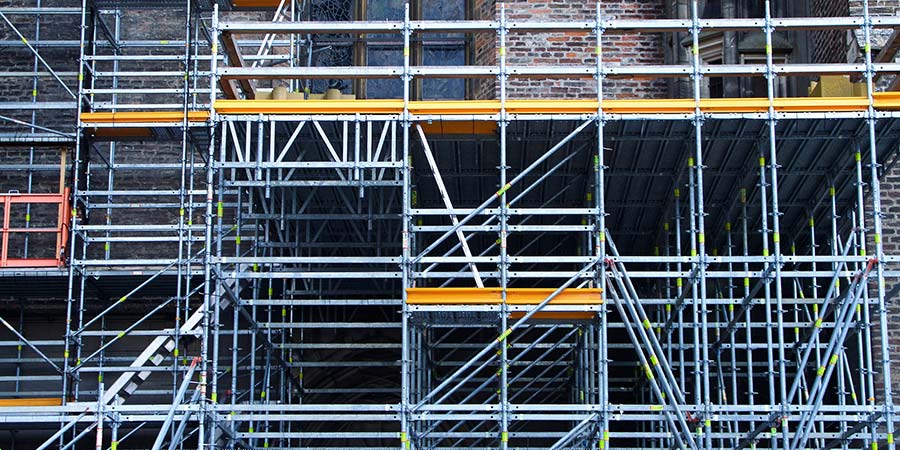 Scaffolding as an aid in construction and maintenance has been in use for over 5000 years with its earliest mentions from the Chinese and Egyptians. Therefore, scaffolding has been instrumental to mankind’s progress. Bamboo, one of the most basic elements employed for a long time in scaffolding has been called the ‘grass that built Asia’.

However, as the times have progressed, superior, safer and more versatile material and designs for scaffolding have become available. The complexity and aesthetics of design, as well as the sheer scale of modern day project, builds, demand safer and multipurpose scaffolding which can support work at height and at the same time ensure safety of the workers.

These forms are based on the nature of work and the type of raw material being used to give rise to the scaffolding.

The 5 reasons to use ring lock scaffolding are:

1) It provides a higher degree of flexibility to lock in a different number of angles and accurately align 45o/90o using the notch.

2) It offers up to 8 connections to be present within different system segments in a unique rosette arrangement which can be self-locked by adaptive wedge, using hammer.

3) It offers the best frame-body stability in its class with the support of complete vertical rod, bar, horizontal-diagonal and vertical-diagonal structure in the 3D space providing a complete lattice system.

4) The commonly used ring lock scaffolding material is either cold-dip or hot-dip galvanized with anti-corrosion technology to ensure longevity and reliability of the components.

5) They are quick and easy to assemble from its fewer set components offering ease of storage as well as transportation.

Apart from these reasons, the load-bearing capacity of ring lock scaffolding has been shown to be better than that of its counterparts. The flexibility and option on offer by the rosette geometry are not only unique but supports several different build types via slab formwork, bridge formwork etc.

Scaffolding forms an integral part of our building, construction, and related maintenance work. Therefore, choosing the right kind of scaffolding becomes necessary not only for safer work at height but also improving on the build times.

Storage and transportation of scaffolding raw materials can cause delays especially at large build sites and ring lock scaffolding components can help to scale back such issues. The quicker erection times can also lead to saving of labour costs. While longevity means that they enjoy longer life thus increasing reusability. This further helps to rein in the costs towards buying new scaffolding material, especially in intensive operations.

Note: This blog has been written taking into the consideration the advantages offered by a particular scaffolding system. This should not be taken or understood as a list; prescribed, stipulated or endorsed relating to any country specific standards or issued guidance. Please refer to the country specific standards and guidance when referring to scaffolding or scaffold related activities.