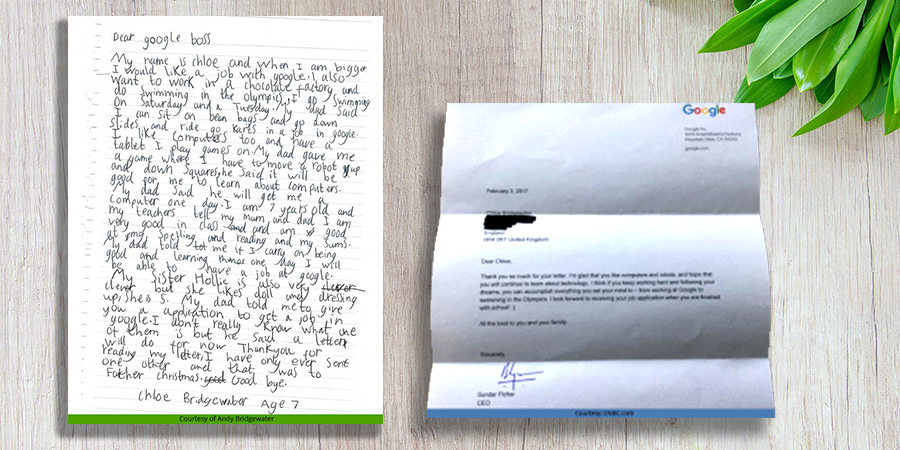 A 7-year old girl, Chloe Bridgewater is making waves in news. This young kid from the United Kingdom penned down a most adorable letter to tech giant Google. With her heart set on working with Google, she took the opportunity and courage to represent her.

Well, this would not have become news just because of her action; it became news because Google CEO Sundar Pichai replied to her. He replied: – “I think if you keep working hard and following your dreams, you can accomplish everything you set your mind to — from working at Google to swimming in the Olympics.

I look forward to receiving your job application when you are finished with school!”

His reply was as innocent as the application he received. So what is the big deal that this has splattered all over the media and social media?

I think the story has a captivating essence because of Google CEO, Sundar Pichai, thought that his reply to this kid’s letter is necessary, through his reply, without mentioning, he explained the core ideology of Google, that they welcome young and innovative minds. Google has proved that it not only believes in technological advancement but also believes in humanity advancements.

It is fascinating because of a 7-year-old, dares to dream big, which is enlightening and fills you with joy. She not only dares to dream, she dares to dream big, fills us all with hope and flare so much that the heart applauds her to her aspirations. It’s not the letter or the reply that touched millions of hearts; it’s the nuances of the whole episode that gives you happiness.

Just think, being just 7 years old, she possessed all the courage to ask from big tech giant and got a reply from ‘Google CEO’.

Chloe has set an example before us; “If you don’t try hard after your goals, you’ll never accomplish them. If you don’t dare to ask, you are bound to loose. If you don’t challenge yourself to take a step forward, you’re always in the same place.”

In real life, most of us cannot break our hesitations and fail to raise ourselves. Sometimes even we shy out to talk to others due to fear or ego etc. We fail to:-

A famous quote by Nora Roberts says “If you don’t go after what you want, you’ll never have it. If you don’t ask, the answer’s always no. If you don’t step forward, you’re always in the same place.”

We are afraid because of rejection. If once a person has experienced rejection, it demoralizes him/her and compels him/her to never ask for that thing again. This rejection fear creates negativity which is very powerful to be overcome.

Believing in you, making efforts and having the courage to ask, stand up for yourself are keys to success.

In life, most things don’t just fall in our lap. We have to try hard, raise ourselves to achieve our targets. I salute little Chloe’s courage at the age of 7 years.