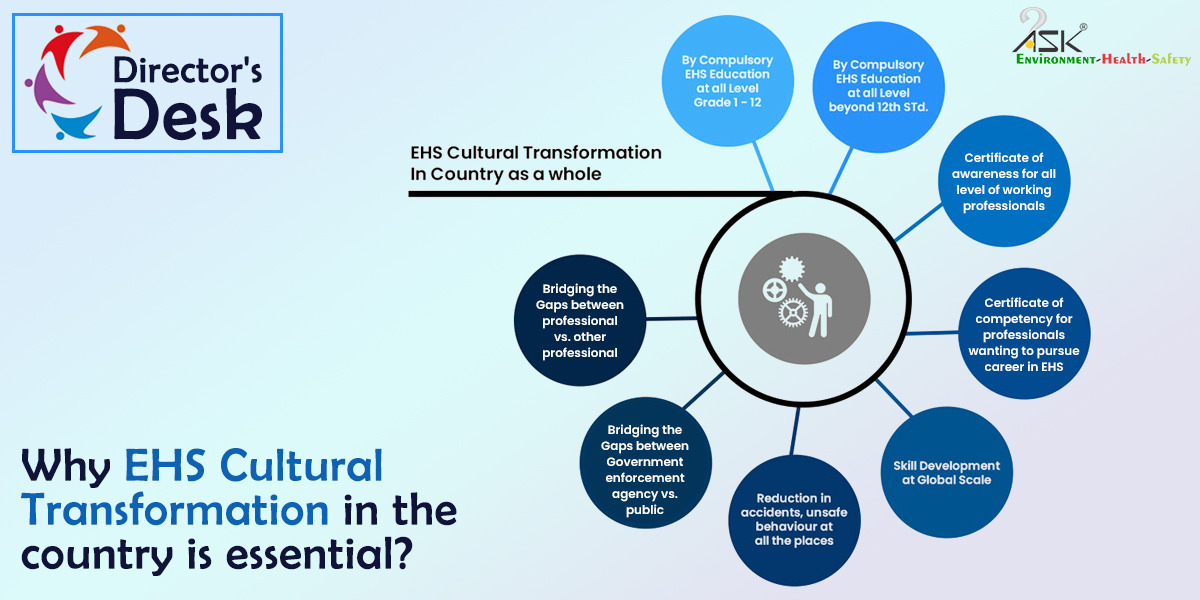 Did you know that 48,000 workers die in India due to occupational accidents of which 38 fatalities take place every day in the construction sector alone? (Source: Indian Express, 2017)

Did you also know that in 2017 alone, there were 4.64 lakh road accidents in India in which 1.47 lakh people died? As per the statistics released in 2018 in an article published by The Hindustan Times, 3 people die every 10 minutes due to road accidents.

Does the grim statistics not make us sit up and awaken us to the enormity of the problem that needs to be addressed by all levels of the nation’s system, be it the Government, NGOs, organized/unorganized sectors, or any other component of the system?

It is obvious that the statistics point to our failure to address the problem head-on and systematically.

At the same time, we must not think that the government or the industries are not doing anything; in fact, it is because of their persistent efforts in this direction that we witness a change in safety perception – more and more people are becoming aware of the need to work safely and be safe. With India’s over1.30 billion population, sometimes the changes are not as visible as they ought to be. The efforts, due to geographical and demography spread, may appear less than desired and not enough to have a major revolutionary effect.

Hence, as a proactive technical safety advisor with decades of experience in various industry segments, I would like to offer some suggestions which in my opinion, if implemented can have a sustainable impact and go a long way in bringing about an Environment, Health and Safety (EHS) cultural transformation in the country. At the same time, I would like to submit that these are no quick fixes, rather as a long-term solution will show results in 2 to 3 decades.

We are aware that every year, experts overtax their brains to reduce road accidents and injuries, sensitize people on occupational health and disposal of domestic waste. The government has come up with various statutory norms and laws. For e.g., a few years back, automobiles were not equipped with seat belts for all the passengers – front and back. But with it becoming a mandatory requirement, not only are the vehicles now equipped with seat belts but also passengers wear them which prevents them from getting seriously injured. Along similar lines, even if it’s out of fear of a challan, motorcyclists do wear helmets which again reduces the chances of severe head damage and fatality in the event of an accident.

Similarly, we see in the educational system, subjects like moral science and environmental science are included to give basic knowledge to children at a young age for water conservation, electricity saving and pollution control. Parents teach their young children to be safe on the road, watch traffic signals, not touch electrical sockets etc. We can collectively think of including EH&S in mainstream curriculum as well.

On the occupational safety and health front, last year (2020), the Indian Parliament combined 25 labour laws into three codes, i.e., the Social Security Code, the Code on Industrial Relations and the Code on Occupational Safety, Health and Working Conditions. The Code on Wages, enacted in 2019, also amalgamated four relevant labour laws.

The Four new Labour Codes are supposed to be effective from 1st April 2021.However, due to the rise in COVID cases and potential impact of the new Codes and employee costs for enterprises, the Government has delayed the implementation of these new Codes until further notice.

In addition to these statutory changes, I propose that there be a mandatory certification in EHS as per the level identified by the Ministry of Labour and skill development. So, whether it is an unskilled worker at Level 1 or the Managing Director at Level 10, irrespective of the industry/project, they should undergo an EHS Certification/Course.

There could be two levels of certification – Certification of Awareness and Certification of Competency. The latter would be for people wanting to specialize in the field, like EHS professionals. The former would be more of a general awareness and specific to the area of operation. In fact, there are talks of a government affiliated EHS skill development framework coming into operation which will offer various courses in EHS as per the level and skill of the workforce, irrespective of the industry they belong to.

How will this help? For example, a welder, who is an expert in his field, and who is skilled in his job as well. Backed by this certification, his knowledge to work safely in his area of expertise, will be unmatched. His competency will be complimented by his knowledge of doing his work safely. He will not have to be told by a safety supervisor to wear his face shield or appropriate gloves to protect himself from any potential injury. Furthermore, he can enhance the value of his services, thereby, improving his income as well.

So, imagine that employees at all levels, competent in their respective fields, also understand the importance of safety and how to make safety an integral part of their work operation. This will lead to a tremendous shift in the attitude of all employees and automatically lead to risk mitigation and reduction in occupational related injuries and ill-health.

There are several professional certification courses available globally as a career opportunity in the field of EHS but not for general employees or all employees. What I have proposed is more encompassing and not limited to EHS specialization alone.

The second area, which I would like to focus on is our youth, the children who are the hope and the future of a nation. We need to sensitize them towards environment, health and safety while they are still young. We can complement the existing course curriculum by making EHS a mandatory part of the educational system spanning 10+2+3 (4) years.  For example, there could be a separate course/subject for primary school from Grade I to V; another one from VI to X and then XI to XII as far as schooling is concerned. At graduation level, whether one is pursuing humanities, commerce, medicine or engineering, let EHS be a compulsory course as it is relevant in all aspects of our lives – personal and professional and affects all of us. As an incentive, after every level, a student would receive a certificate in EHS. 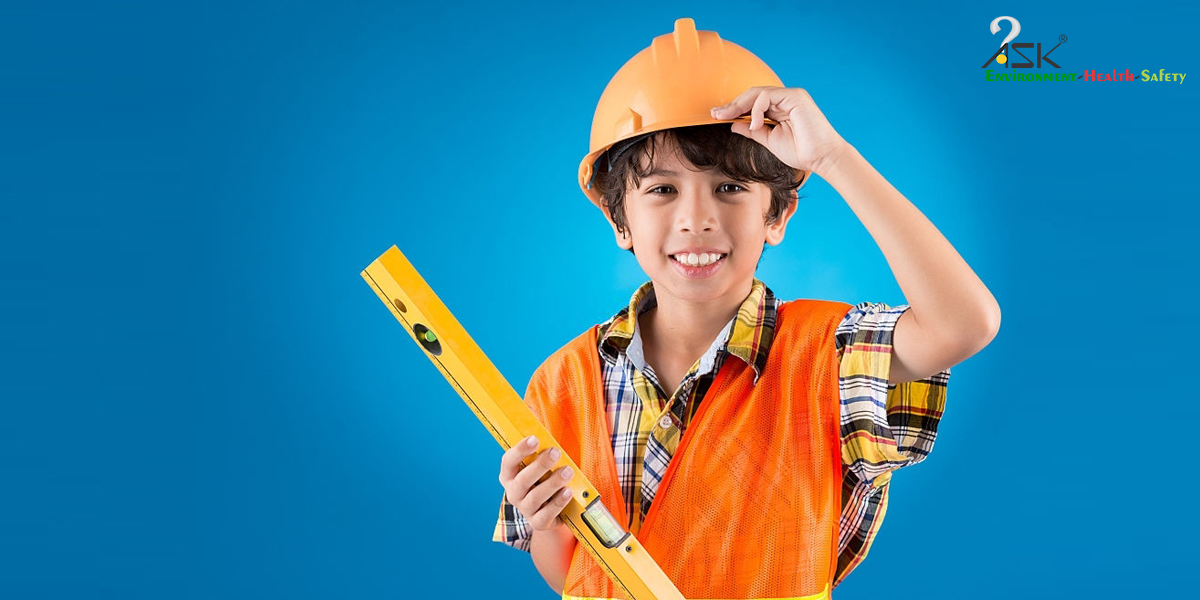 I take cognizance of the detailing it would require along with the involvement of the government, the education sector and passionate commitment to make this dream a reality. No way am I saying that it will be easy and though it may appear to be a simple solution, it is not simplistic. On the other hand, it is quite simple if we are convinced about it, believe in it and are determined to make it a reality. We, from the industry, can make it a collaborative venture with the government to give it shape and roll it in a few years.

With this in place, in the next 15-20 years, the understanding and perception of EHS will improve and the behaviour of the general public will become safer. With increased knowledge, risk perception will increase. With increase in risk perception, risk behavior will be mitigated. Everyone, irrespective of their future career, even home makers for that matter, will have the basic knowledge related to EHS.

To substantiate my proposition, when the children were made aware of the pollution that the burning of crackers caused during the festival of Diwali, there were many children who took a stand and decided not to burn crackers. In fact, they became the influencer rather than the influence. They were able to convince their parents to celebrate an eco-friendly Diwali. Imagine then, when the entire generation of a country becomes sensitized to the importance of EHS in their lives and towards a sustainable future, what impact will it have on the future of our nation. Such a revolutionary step will eventually bring about an EHS cultural transformation in the country where none is left behind. It will not matter where these youth work then – they will carry a safe mindset.

These steps will then reduce the gap between industries, between safety professionals and line managers. Once everyone is clear about the safety norms and severity of risk, it will lead to proper risk mitigation.  We will be practicing safe behaviour very naturally, just like we did in our infancy or as toddlers.

When that happens, companies will have reduced financial and human losses, lesser injuries and absenteeism due to occupational ill-health; rather there will be increased productivity and efficiency. The availability of labour and brainpower will be backed by adequate skill sets and the product will be error-free. A sustained effort in this direction will lead to improvement on a global scale and India will be a force to reckon with, at par with the developed countries in times to come.

Your ideas/ inputs/ feedbacks are most welcome!