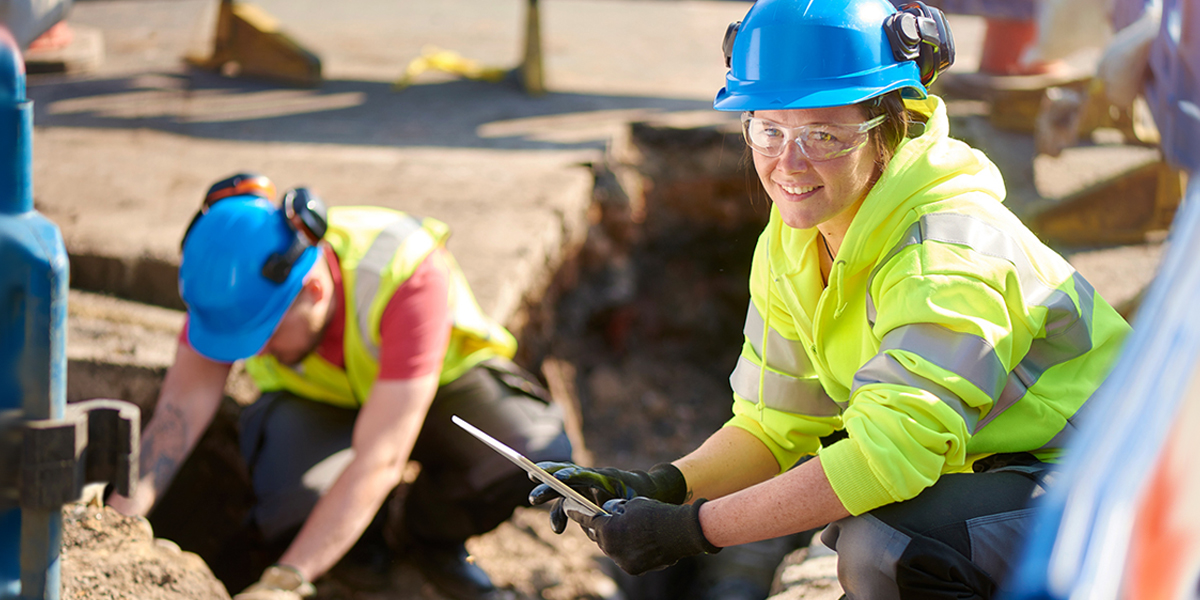 Dirt. To you or ones perceiving it generally, doesn’t necessarily seem very dangerous.

But are you aware that even one cubic yard of it, is enough to half fill the bed of a full-sized pickup truck, and can approximately weigh as much as a car? The weight is a concern.

We would be willing to bet if asked you to use your imagination and pretend to look at a potential fall hazard, what would you do in that case?

You would get your head tilted back and wonder if that building was under construction – and you’d be right, mostly.

But what if the hazard falls below ground level? Remember, you don’t always have to climb up to be exposed to a fall, sometimes you can stand right where you are and watch the ground move away from you.

A worker climbs down into the trench to perform easy tasks (ones they have executed multiple times) before. Maybe he’s the one who is aligning a pipe or tightening a connection.

Suddenly, the soil around breaks free, following the path of least resistance – flooding the bottom of the trench, and burying the worker alive. In this way, thousands of pounds of soil engulf the worker in a matter of seconds, which crushes down on their body and chest. Though they await and rescue, in absence of immediate actions, they slowly suffocate and die in a hole they very well may have dug themselves.

Had it been just a bit of fiction, the visuals would have been appealing. But sadly, it isn’t! This is how 35 workers’ lives were tragically cut short between 2012 and 2015. Prevention could have been possible had the supervisors and the ones working would have been prompt about what was going around.

As result, excavation and trenching are segregated among the most hazardous operations. They can result in a fatality rate that is 112 percent higher than the rate for general construction. Be it cave-ins or asphyxiation, oxygen content lacks in a confined space – hence they remain as major risks due to lack of oxygen in a confined space, are major risks, and are more likely to result in worker fatalities.

Being careless or making mistakes leads to fatalities among the work crew.

Mostly, site supervisors remain concerned about the safety and worry encapsulates them – the feeling that they are leaving themselves and their workers open to potential hazards opts them to take preventive measures.

What should the safety personnel ideally do?

Goal 2—Identify the barriers that are perceived to acquire, assemble, and implement trench protective systems.

Goal 3—See through the optimum information sources to reach employers and workers – raise the know-how about safety in the trench.

Goal 4—Identify their safety and health practices in work environments.

Goal 5—Watch out for their learning and understand their experience of current and previous experience with safety training, especially one that’s related to trench safety or other work practices.

So, to keep workers and job sites safe, who needs to stay aware, prior?

Protecting workers around a site begins with having trained and competent personnel – the essential criteria remains that he/she is capable to identify existing and predictable hazards.

Reason – prompt decisions matter the most (read the example above). When corrective measures are fastened, one can eliminate or control the conditions. Be it a supervisor or any competent person in place, he is part of a written plan for excavation and trenching safety, their inspections, and predictable, hazardous, unsanitary, or dangerous conditions.

How do they stay connected?

Employees are wearing reflective vests to protect themselves from vehicular traffic, following a proper means of egress (be it a ramp or a runway).

Videos can visually mark and define what is the safest distance from the excavation edge to maintain from preventing any material from falling and rolling into excavations.

Inspection should be completed by a “competent person” to prevent cave-ins and look for indications of protection systems failure, the potential for a hazardous atmosphere, and evidence of other dangerous/hazardous conditions.

The supervisor and his team’s awareness and understanding remain prime – be it clearing the excavation area of all the obstructions. In cases of such instructions and SOPs communicated via visuals, decisions on types of protection too can be taken, for the workers.

After all, no two sites are alike.