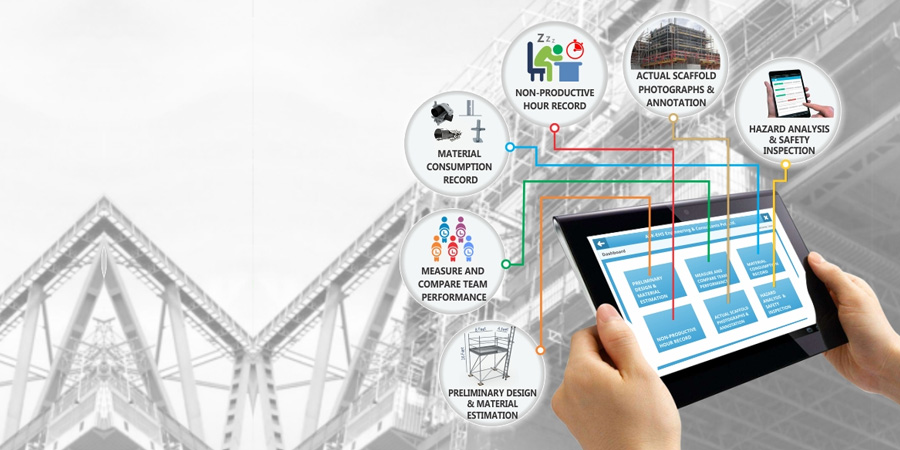 Scaffolding operations entail many complex but mandatory safety processes that have contributed to losses in kind and cash if not followed accurately. One of the most common losses observed, is in relation to material losses involved in the erection and dismantling operations of scaffolds.

Most of the leading contractors (heavy infrastructure and engineering) have large areas covered in a single project. Such an operation might require multiple scaffolding sites. Most of these operations entail paper driven systems that take a whole lot of time and are cumbersome. Sometimes it becomes extremely difficult for authorities to accurately track the existence (or non-existence) of scaffolds. Often scaffolds are dismantled only to know that a similar one was required at that very same spot. This may result in huge operational losses for the organization.

Paper driven systems aren’t up to task for supporting the megascale build projects that have become the norm in recent years. Such mega-projects have parallel operations crew which work side by side to deliver efficient construction. Software approach offers the best possible fit and even retro fit as it is adaptable. The second best feature of software approach being the ease of deployment and distribution on such sites.

Here are some of the other challenges that organizations face;

The emergence of the computer and its multiple capabilities, has successfully addressed many of these challenges. It is getting clearer that using technology, many of these complex procedures can be simplified. The biggest benefit of such digital processes has been a radical reduction in the time consumed by operators during scaffold operations.

A clear example of this could be given through the example of using a “Floor-map” in your Scaffold Management Software. Live data feeds can allow you to view and review the progress of any scaffold. Live images captured through handheld devices can be saved and transmitted to authorities on their dashboards. Armed with this information, one is able to decide effectively for erection and dismantling of scaffolds. Floor maps can also be used to plan for additional structures or creative designs. These are often added right at the end and demand more attention. Scaffolding Management Software can also integrate such last-minute build ideas, safely.

The other aspect in scaffolding erection and dismantling is knowing the particular “scafftag” status. Scafftags are issued post inventory inspection and clarify the health status of the scaffolding material, for one. Other scafftags with colour coded forms are part of the scaffolding lifecycle as per the process followed within an organization. Scaffolding management software can display the real-time status of scafftags through the floor maps feed. This ensures that only quality tested and ‘healthy’ scaffold is being used for construction purposes.

Learn more on how a Floor-map tool can save time and money for corporations.