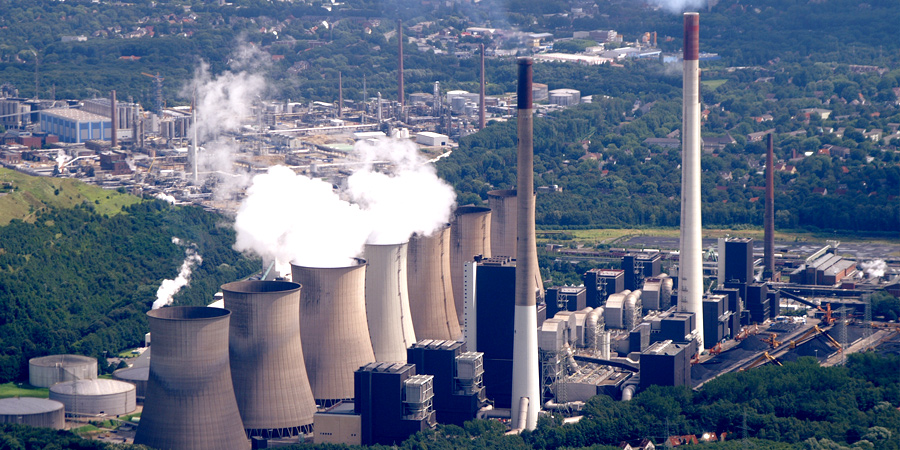 Consider this, nearly 200 countries from around the world were signatories at the COP 21 summit held in Paris’16-17. This means that all these countries would try to cut down on Greenhouse Gas emissions (GHG) in order to scale back man-made climate change. The specific aim is to achieve 2o celsius drop in the overall temperatures across the world compared to pre-industrial levels.

Now, visualise the number of vehicles around you; in the parking lot of your workplace, in the vicinity of your home and on the road. Take a rough estimate of how this picture has changed over the past 10 years, if you are younger, then even 5 years should suffice.

The visualisation exercise would provide a mismatch from first to second para in distinct ways. And we are only talking in this case about personal vehicles as an example for pollution. The thousands of commercial vehicles in question along with industrial expansion, are all equally contributing to GHG emissions.

If you have difficulty visualising the extent of our fossil fuel consumption, here is a brightly coloured graphic doing a systematic comparison over the years between fossil fuels and renewable energy resources. 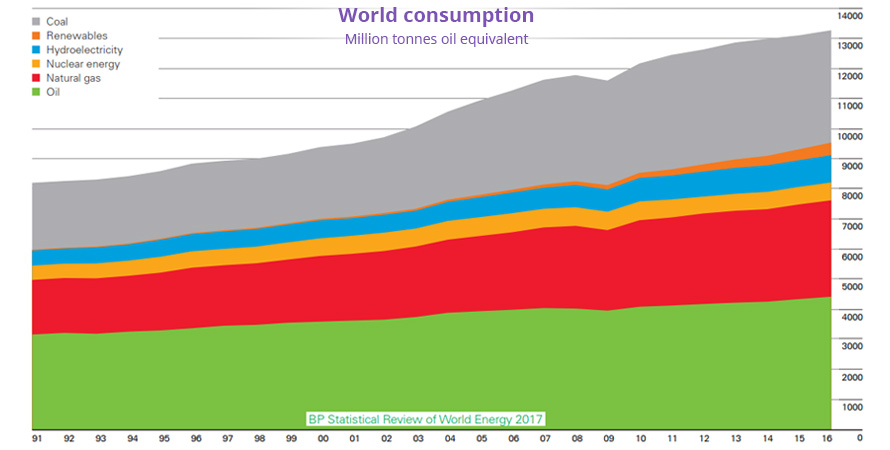 From the year 1991 till 2016, the fossil fuel consumption trends are crystal clear.

Fossil fuels have always had an upper-hand due to a couple of reasons:

First factor is clearly about the business and international trade systems. These ultimately end up governing the energy policies of nation states. The industrial demands and domestic energy needs can all be traced back to oil and coal usage. If there is a resource for taking that has been used for hundreds of years, then why stop its use suddenly? A sort of question that has challenged global warming for many years now.

Second factor is the rise of billion plus nations like China and India. Their economies have turned into a consumption juggernaut, requiring endless supply of coal and oil. In the spate of this activity, even more polluting fuels such as petcoke are actively being imported, to sustain the demands.

Third factor is about our human nature of habit. As creatures of habit and repetition, coal and oil, over the course of time, have been projected to the pulpits of energy supremacy. All architected via our habits of relying on fossil fuel and their repetitive usage to run our technologies.

Fourth factor refers to not so much the absence or non-availability of better options but the ‘lack’ of good judgment based upon sound scientific premise, i.e. to give up fossil fuels and start embracing renewable energy resources. The consumption fueled run of our “progressive” mindset equates change to the use of power and hungrier technology, running on traditional fossil fuels. Instead of coming up with cleaner and greener alternatives which have always dwelled in the shadows.

These four factors have led the human race becoming addicted to the use of polluting fuels. The amount of carbon being dumped into the atmosphere, acidification of oceans and increased respiratory diseases, worldwide aren’t coincidences. Man-made climate change isn’t a mere coincidence.

Our technologies have been fuel hungry and will continue to remain so unless policy making, governance and industries make an effort. Consumerism also has a sizeable footfall on consumption. And more than “acts” of celebrating environment, behaviour change would be required to shape our new efforts.

Electric vehicle are a great start that can now cover more distance due to efficient battery technology. Blending fossil fuels with other organic hydrocarbons (methanol and ethanol) is being used world over. The per kilowatt hour rate of solar energy even for India is falling rapidly. Dirtier fuels like diesel are being effectively phased out.

The right battle to get rid of our addiction to fossil fuels, however, lies in our individual mindset and governmental policymaking. A report by NITI Aayog in partnership with Rocky Mountain Institute has projected mobility as the focus of reducing carbon footprint. It states that by “making India’s passenger mobility shared, electric and connected can cut its energy demand by 64% and carbon emissions by 37%”.

The plan of action firmly remains with the idea to explore and promote non-polluting technologies. Rising temperatures and climate change have spelled a disaster for farming, dirsupting our food supplies. Changed climatic patterns and rising sea levels means that nations are spending more resources on battling natural disasters than ever.

Fuel addiction of an industrialised society consuming any and all resources to satiate the demand definitely isn’t the model for a sustainable future.

2 thoughts on “Our addiction to fossil fuels: A reality-check”