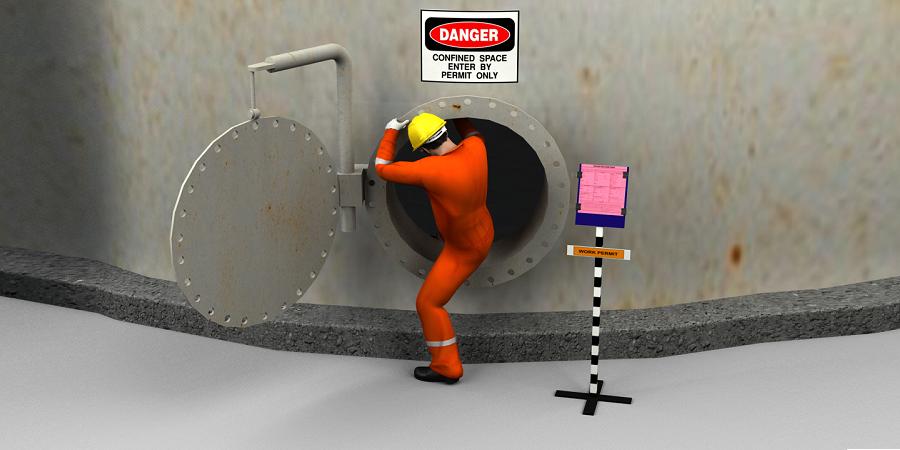 When preparing for restricted space work, did you overlook a critical hazard? Which one do you believe gets forgotten the most?

If you listen to a lot of employees, managers, and health and safety advisers, you may believe that the only things that could kill people in a confined place are explosions and dangerous gases.

If you ask someone who has studied the Confined Space Regulations 1997, they will likely correctly point out that drowning and severe increases in body temperature are among the consequences.

So, what is typically overlooked?

If you’re falling headfirst down a pitch-black hole in the ground, wearing steel toe cap boots and a hi-viz vest won’t do much good.

How often have you seen someone open a manhole cover before standing next to it with their hands on their knees and bending over to see what’s underneath.

They might even be monitoring the gas, which is necessary, yet they could fall in! In fact, it’s not uncommon to see a health and safety manager or trainer lecturing staff members while standing next to an open cover or hatch with a 4 or 5 metre drop below it about the dangers of oncoming traffic, the weather, and the necessity for the proper PPE. Not a harness or barrier to be found. The group may then be permitted to peer inside the cramped area, craning their necks to peer down into the shadows.

Any number of distinct cramped areas, including a silo, vessel, or valve chamber. This is a typical circumstance for many businesses that operate in small areas.

There are seven risks that make enclosed spaces dangerous.

If working in limited spaces is unavoidable, you must use utmost caution. The results of getting into trouble in a small area can be fatal. Getting trained via practical and virtual learning such as safety animation and eLearning shall enhance their SME in confined space.

For now, here are the top 7 dangers in restricted spaces.

Within a small area, organic reactions can draw oxygen from the surrounding atmosphere. Certain soils and oxygen, or groundwater and chalk or limestone, can react to produce carbon dioxide, which replaces oxygen in the atmosphere. The formation of rust inside tanks might also result in an oxygen shortage.

After accessing a cargo hold at Goole Docks in 2014, three crew members perished. 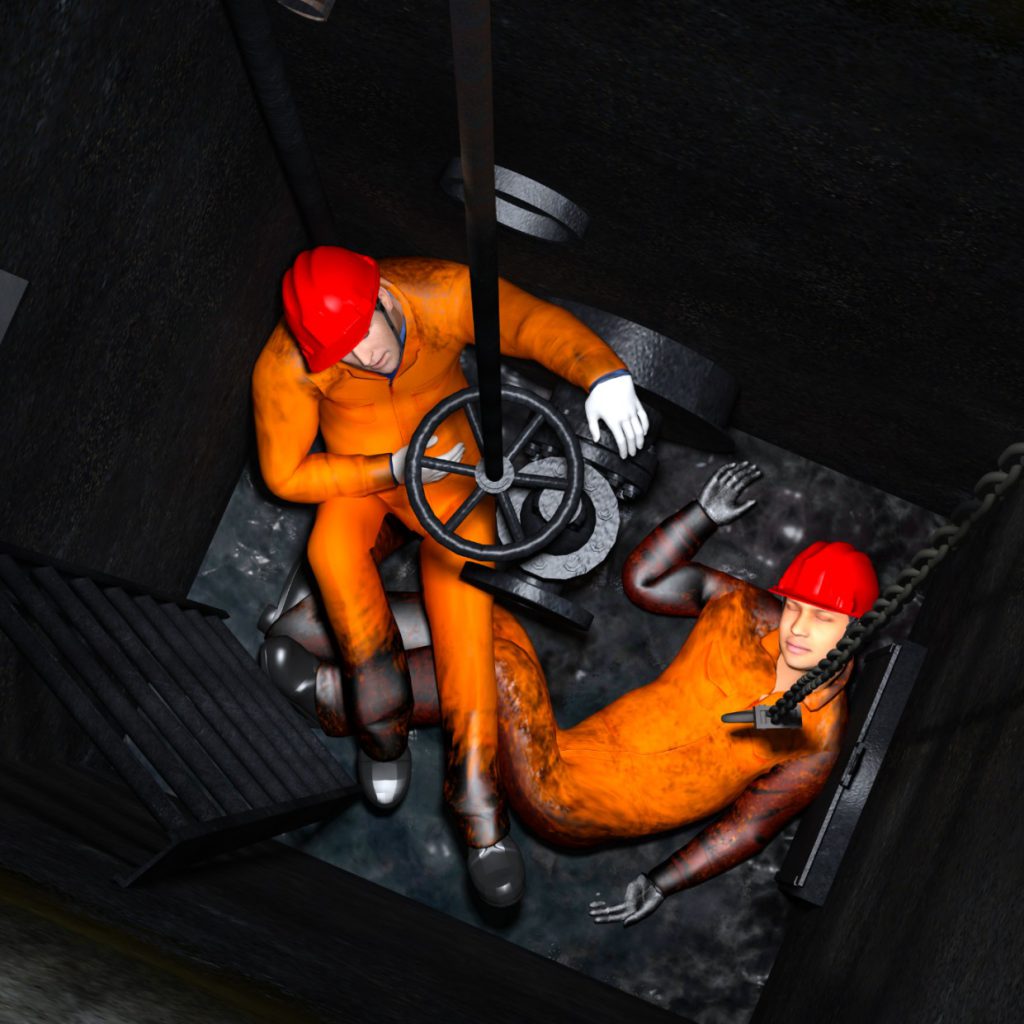 Constrained spaces are particularly susceptible to the build-up of poisonous vapours and gases due to poor ventilation.

Deadly gas leaks from polluted land or burst gas pipes, for example, can enter the small space. Alternatively, they could be produced by the task being done, like welding, adhesives, or paint fumes.

These gases and vapours have the potential to produce a hazardous atmosphere in tight spaces without extraction or ventilation.

Liquids could soon overflow the little area, especially in drainage or sewer operations, trapping people within and possibly drowning them.

And you ought to be concerned about more than simply liquids. Solids can also overflow small places, such as trenches that have collapsed, putting anyone inside the trench at risk of becoming trapped or buried.

Because confined places might be small, flooding can happen quickly, giving no time for escape.

Within tight spaces, dust can accumulate naturally or because of the activity taking place, such as drilling or grinding.

Inhaling too much dust can lead to lung issues, and dangerous dust can even be fatal.

Dust accumulation can also raise the risk of a fire or explosion, particularly in areas with poor ventilation.

The risk of fire and explosions can be increased by the presence of flammable dust, liquids, gases, and vapours inside the enclosed space. Any hot work or items that can spark being used in the restricted location increases the risk.

Recall how the first item on our list was an oxygen shortage? Of course, too much oxygen is hazardous as well. Oxygen levels that are too high raise the possibility of fire and explosion.

A harmful rise in body temperature might be caused by difficult building work, heated conditions, or naturally occurring heat. This can easily develop into a problem in small locations that are challenging to escape from even under ideal circumstances.

Due to the constrained nature of a limited space, heat can build quickly.

Heatstroke, exhaustion, and collapse may result from this.

In addition to being dangerous, confined locations can be challenging to enter. This makes it challenging to leave and makes any emergency rescue tough.

It could be difficult or impossible to escape once you are in a small area. Therefore, it’s crucial to understand that work can be done safely before you enter and that emergency plans are in place.

If working in confined spaces is unavoidable, you must do a confined spaces risk assessment to determine the dangers and what safety measures are required to control the risk.

One step away from not going home from confined space hazards

While explosives and hazardous gases continue to be significant threats in many tight areas, there is another concern that frequently goes unrecognized. It is a risk that, overall, is responsible for the most workplace fatalities.

“…a thump and moans of anguish, then a minute of silence.”

Imagine the setting. A manhole that is around 10 feet deep is being used to access a tight place by a group of workers. In the centre of a field, there is a manhole. The area has been gas tested and vented. Over the manhole, a tripod has been placed. This is a solid beginning. As they descend a ladder or step irons, the tripod will enable them to be secured to a fall arrest device.

Two of the employees are positioned about two feet from the manhole, adjacent to the tripod, and are both wearing harnesses. But nothing is attached to their harnesses! If you take one step back, there will be a brief period of silence, followed by a thump and agonising groans. They’ll drop through the manhole quite effortlessly.

They may enter the manhole safely thanks to the harnesses they are donning. But because they are so close to the entrance, they are vulnerable and at risk of falling at any time.

Not good at all.

For that matter, the law. Regulations specify.

“When performing work at a height, every employer is required to take reasonable precautions to prevent employees from falling an unsafe distance.”

There was a chance that someone could fall and sustain personal injury in the confined space access scenario we’ve been thinking about so far.

But from above ground, nothing has been done about it. What appropriate and sufficient steps might there be to stop this, then?

The usage of barriers is preferred wherever possible. Workers at ground level are prevented from falling by barriers. Additionally, some of them contain a gate so that workers can enter through the gate after attaching to a tripod-mounted fall arrest device while outside the barrier. Collective protection, such as barriers, are preferred when comparing fall protection strategies since they protect everyone beyond the confined zone.

Additionally, little training is needed for barriers to work. Barriers have the drawback of potentially obstructing rescue operations. Some metal barrier systems have been attached to tripods or davit arms, resulting in a durable and portable integrated access solution.

Workers can be protected by using personal protection devices like fall arrest lanyards or adjustable lanyards. They provide a versatile option that leaves the tripod accessible while simply shielding one person. Barriers are normally preferred because these systems can only protect one person at a time; nevertheless, in a rescue scenario, lanyards can provide more room for the extraction of a casualty in an emergency.

Lanyards ought to be utilised as a component of “work restraint” systems whenever practical. To avoid falling, the user cannot reach the fall hazard physically. If properly configured, this will continue to permit the tripod’s or other rescue equipment’s usual operation.

Would you opt to restructure your confined space rules, now?